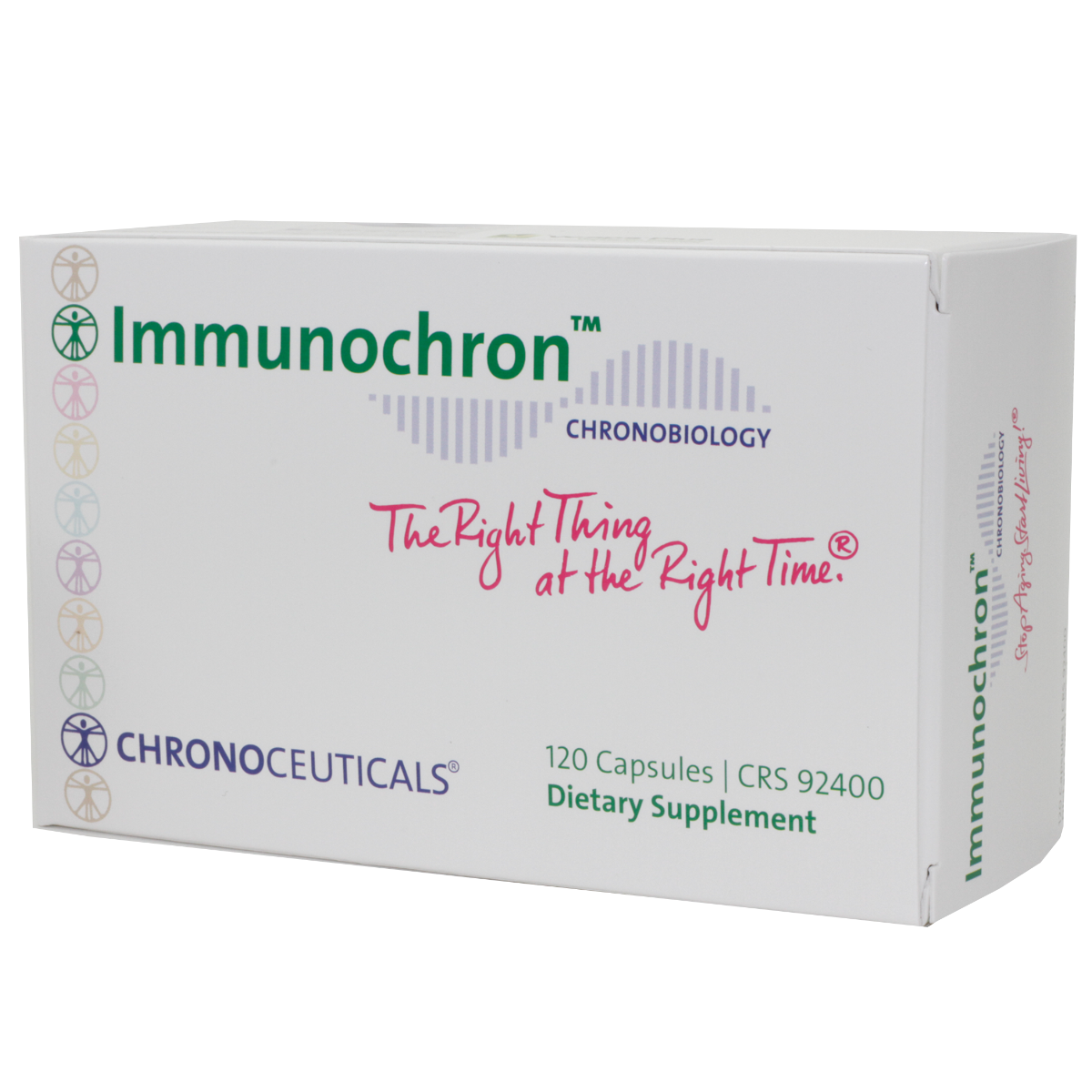 (1 Box: 120 Capsules) - Immunochron® is a chronobiological dietary supplement for promoting a strong, healthy immune system and helping to modulate inflammation.

An effective immune system is essential for detecting and defending against pathogens, removing toxic substances and eliminating diseased cells from the body. In an age where viral diseases such as hepatitis, influenza and/or COVID-19 are becoming ever more frequent, a well-functioning immune system is more important than ever.

The bowel in particular plays a key role in an effective immune response. Researchers have long known that this organ is extremely important for the immune system. In fact, the intestinal mucosa hosts 70 to 80 percent of the cells that produce antibodies to effectively fight harmful intruders. If the intestinal flora is not intact, there is an increased risk of developing viral diseases and infections. This is where probiotics, which the WHO refers to as “live microorganisms which, when administered in adequate amounts, confer a health benefit on the host,” come into play.

Even though probiotics are largely considered safe, the live bacteria that they contain can adversely impact the health of some people; for example, those who already have inflammatory disorders of the pancreas and/or bowel. However, new alternatives to these live probiotics, such as Immuno LP-20™, have recently become available.

Immuno LP-20™: This product, which is produced from the bacterial strain Lactobacillus plantarum L-137 (HK L-137), promotes a healthy, strong immune system in a similar way to other immunobiotics by supporting the body’s natural immune function and helping to counteract destructive cellular activity, but much more safely than is possible with live bacteria.

Immuno LP-20™ is heat-treated Lactobacillus plantarum L-137 that was originally isolated from fermented fish and subjected to specific heat treatment under optimized time and temperature conditions, allowing it to retain its immune-supporting properties while killing off the live bacteria.

Research suggests that heat-treated Lactobacillus plantarum L-137 promotes optimal immune function by increasing NK cell activity in particular. NK cells play a key role in the body’s natural immune response and their benefits include a strong response against viral infections. Low NK cell activity has also been associated with the development of infections, especially in older adults. Studies have also shown that oral administration of Immuno LP-20™ specifically enhances protection against influenza virus infections, thanks to increased production of type I interferons (which help to promote healthy immune system activity).

Beta-glucan: Beta-1,3/1,6 D-glucan is a compound made up of multiple glucose molecules that occur in the cell walls of fungi and plants. According to scientific studies, beta-1,3/1,6 D-glucan is one of the most effective natural immunomodulators, as it modulates macrophage activity. Decades of research have also shown that not only is beta-1,3/1,6 D-glucan able to encourage healthy immune system function but it can also be used in cases of unhealthy cell growth, ulcers, infections resulting from radiation exposure and trauma.

Indeed, one of the most important physicochemical properties of glucan is its antioxidant effect, which, among other things, helps to protect against free radicals. Several recent studies also indicate that beta-glucan plays a role in mitigating allergies and that beta-glucan supplements can help soothe symptoms of allergic rhinitis and conditions of the upper respiratory tract as well as several other allergy symptoms, such as increased production of IgE antibodies.

In another study that examined asthmatic children, subcutaneously administered beta-glucan positively influenced the production of the anti-inflammatory interleukin 10, which helped to soothe asthma symptoms. It was subsequently shown that oral administration achieved the same result.

Beta-1,3/1,6 D-glucan could also be a potential strategy in COVID-19 cases, thanks to its ability to support a healthy, strong immune system -- namely its ability to promote healthy levels of interferon-gamma (IFN-γ), the suppression of which is characteristic of a SARS-CoV-2 infection. However, further and more in-depth research is necessary to establish this with certainty.

Barley grass juice powder: Barley is considered to be the oldest crop cultivated by humans. This grain has been cultivated since before 7000 B.C. and offers not only a filling meal but also healing properties. Grains contain numerous vitamins and minerals that have a positive effect on health. For example, the aforementioned beta-glucan contained in certain grains helps with gastrointestinal problems by binding toxic substances, as well as cholesterol, in the gut. Barley also contains valuable B vitamins, protein and trace elements. Studies show that various components of barley have an inflammation-modulating effect on LPS-activated macrophages, which is why barley may be useful as a conceptual treatment for inflammatory conditions such as rheumatoid arthritis. These components can also be effective in cass of skin disorders such as atopic dermatitis. In regard to COVID-19, initial research has also shown that certain components of barley specifically block the ACE2 receptors used by SARS-CoV-2 to enter the host cells.

Hops flower extract (Xantholhumol): Hops are traditionally used for sleep concerns and are enjoyed for their mildly sedative properties, which is why they are often combined with valerian. The bitter compounds contained in hops are also especially beneficial for digestion and have a positive effect on the immune system. This is why hops can be used to protect against unhealthy cell growth and inflammatory conditions.

BioPQQ™ pyrroloquinoline quinone disodium salt: The importance of Bio-PQQ™, also known as pyrroloquinoline quinone, for human health was not discovered until 2003. This vitamin is involved in over 20,000 physiological processes and thus has an immensely important role in protecting against numerous diseases. Not only does it have a positive effect on general metabolism, muscular function, nerve conductivity and the immune system, but it also boosts many of the effects of other vitamins.

Vitamin C has the ability to intercept and disable free radicals in the body. As such, vitamin C also boosts the body’s defenses. It is also involved in the synthesis and regeneration of collagen, an important protein in the body that is needed for the regeneration of tissue.

Vitamin D (as cholecalciferol) helps the intestines to absorb calcium and phosphate from food. It also helps mobilize these two substances in the bones where necessary while helping to enhance the mineral content of the bones, thereby maintaining essential physiological blood calcium levels by minimizing the loss of these minerals via the kidneys. Aside from regulating the physiological calcium level, vitamin D also plays a role in activating the immune system’s cells, contributing to the healthy overall functioning of the immune system.

Zinc: The trace element zinc is a component of many enzymes or their cofactors and is therefore extensively involved in metabolic processes. It is important for cell division, plays an essential role in protein metabolism and also plays a part in the effect of growth and sex hormones. It is also a component of many antioxidant enzymes, making it important for protection against free radicals. All of these mechanisms make zinc important for promoting a strong immune system.

Selenium: Selenium is also a cofactor of many enzymes and helps to protect cells from oxidative stress, thus contributing to a healthy immune system.

Alpha lipoic acid: Alpha lipoic acid, often referred to as the “ideal antioxidant,” can replace or regenerate other antioxidants such as vitamin C or E. If you do not absorb enough of these substances through your diet, alpha lipoic acid supplements can cover at least part of this deficit. Alpha lipoic acid also plays a key role in supporting healthy blood sugar levels. According to scientists, insulin resistance and diabetes are partly caused by an increase in oxidative stress and the production of free radicals. It is also known that diabetics suffer from more frequent infections, and that their immune system does not react optimally. This is where antioxidants, and alpha lipoic acid in particular, can intervene to provide protection.

Resveratrol: Resveratrol, a polyphenol, is a highly effective antioxidant originally derived from the skins of red grapes. In the human body, it works to encourage healthy inflammatory processes and helps to protect the cells. This provides particular benefits to the areas of the brain’s vascular system, and the cardiovascular system as a whole, that are most affected by aging. Studies have proven beyond a doubt that resveratrol also produces other fantastic-sounding effects -- namely that it reduces the risk of developing certain forms of dementia that are associated with the formation of plaques in the brain. It encourages energy collection in the mitochondria, which are the power plants of the body’s cells. It reduces cardiovascular risk factors; a fact demonstrated utilizing blood flow measurements in the brachial artery (FMD). It also helps protect against obesity and insulin resistance. Resveratrol also supports healthy blood sugar levels within normal ranges. Even the skeletal muscles benefit demonstrably from this polyphenol. Its positive effects on the immune system have also been proven on multiple occasions.

Supports a healthy immune system:  Immuno LP-20™ supports the body’s own healthy balance in its Th1/Th2 immune responses against pathogenic microbes, viruses, allergens and much more. Early studies suggest that not only is Immuno LP-20™ able to help the host body defend against colds, but also against other viral infections, including type A influenza and likely also coronavirus. Scientific evidence also confirms Immuno LP-20™’s ability to protect against allergies and unhealthy cell growth.

Gum inflammation:  Immuno LP-20™ also seems to have positive effects on various infections, including those of the oral cavity. Gum inflammation is a multifactorial condition resulting from three key factors that affect one another: oral bacterial counts, the host’s immune response and environmental stresses. Due to its antioxidant, antibacterial and inflammation-modulating effects, Immuno LP-20™ may help to reduce the number of bacteria and the expression of inflammatory mediators, which is why it is worth considering as a supplement to conventional treatment.

Respiratory conditions:  The oral administration of Immuno LP-20™ can help protect against upper respiratory tract infections. A study demonstrated that healthy test subjects under high mental stress who took Immuno LP-20™ daily suffered less frequently from infections of the upper respiratory tract and that both the duration and severity of symptoms were significantly reduced. These findings suggest that taking Immuno LP-20™ daily may help protect against viral respiratory conditions by encouraging the healthy functioning of the immune system.

Dosage: As a dietary supplement, take 2 AM capsules (yellow) in the morning, and 2 PM capsules (blue) in the evening at mealtime with 8 ounces of water.