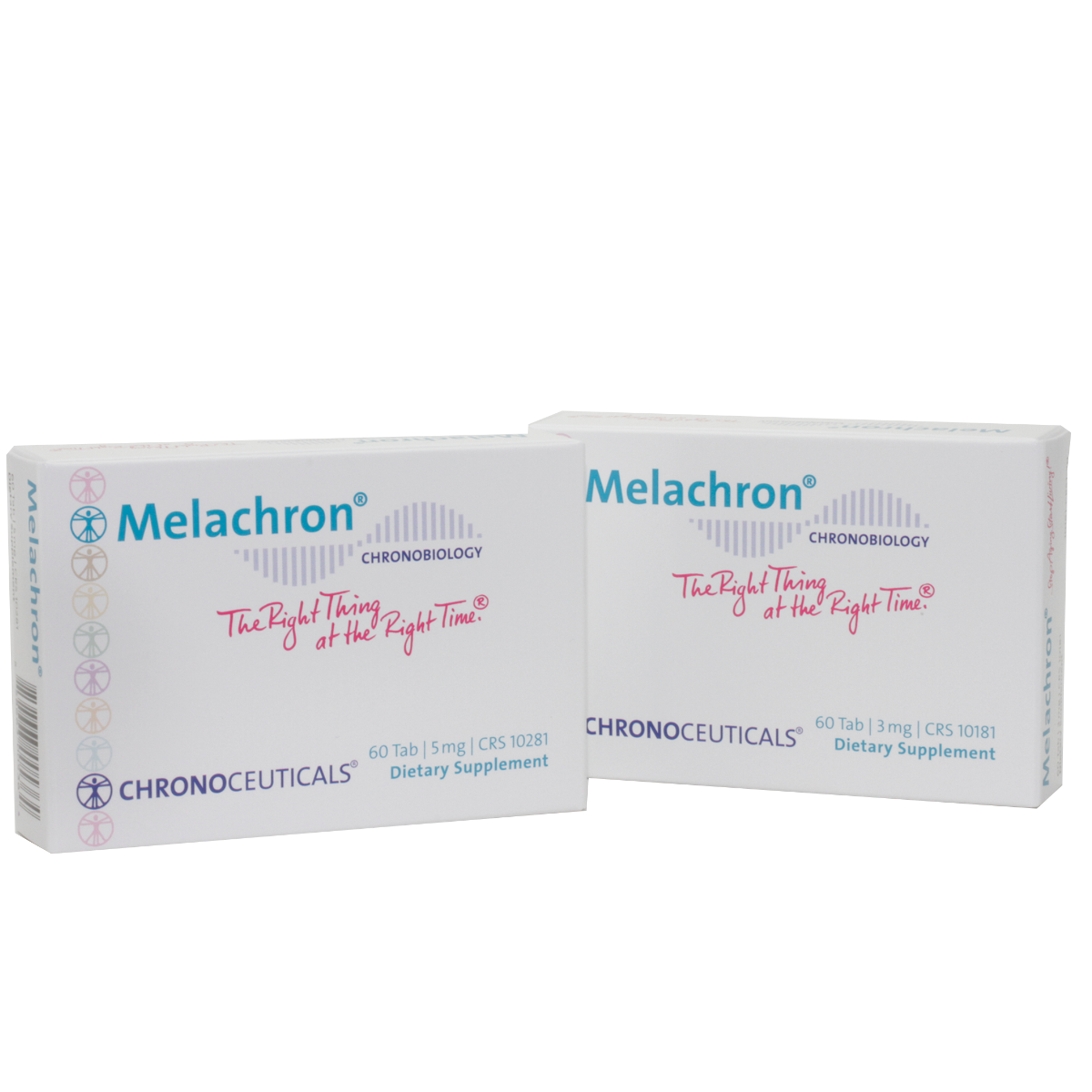 Melatonin is a natural substance produced in the pineal gland and released in a specific daily rhythm that roughly corresponds to the 24-hour light/dark cycle. Melatonin is responsible for coordinating your body's circadian (day/night) rhythm, and for synchronizing your inner clock on a daily basis.

Daylight inhibits melatonin production – in fact, most melatonin is produced at night in response to decreased daylight, eventually reaching levels that induce sleep. Ideally, melatonin levels should peak about two to four hours after you fall asleep, and then decrease gradually until waking. Any disruption in normal melatonin production can lead to problems falling asleep and staying asleep.

Because melatonin production decreases with age, melatonin levels might increase eight- to ten-fold during the night in a young person, but only two-fold in a person over age 60 - a marginal increase that often occurs too late in the night and for too short a period to ensure a satisfying night’s sleep. Aside from creating a less-pronounced day/night rhythm, this minimal increase also fails to properly synchronize the inner clock. This may be one reason that those over age 60 are more likely to suffer from difficulty falling asleep.

The best-researched effect of melatonin is its influence on the sleep-wake cycle.  Maintaining proper melatonin levels helps to minimizes difficulties in falling asleep as well as problems sleeping through the night. Because of its ability to reset the sleep-wake cycle, melatonin can also help with jet lag symptoms: when taken at the correct time while traveling, melatonin can promote a quicker return to a regular sleep-wake cycle.  Melatonin is also beneficial for shift workers who, like those suffering from jet lag, frequently suffer from disturbed sleep due to an altered day/night rhythm.

Melatonin has also been shown to have a positive influence on quality of life in the elderly. In all clinical trials so far, higher melatonin levels in the elderly improved general feelings of well-being and overall health.

Sleep: Melatonin was discovered by Dr. Aaron Lerner in 1958. It has been intensively researched since the early 1980’s, when its regulatory effect on the sleep-wake cycle was discovered and it began to be used to treat jet lag and support a natural sleep-wake cycle. Double-blind studies have shown that not only does melatonin help you fall asleep and improve sleep quality, but in the correct dose and form it also assists in sleeping through the night. In order to achieve both desired effects, it’s crucial that enough melatonin is absorbed by the body at the beginning of the sleep phase (the ‘falling asleep’ phase), and that sufficient melatonin levels are present in the body for the next six to eight hours (the ‘sleeping through the night’ phase).

Most melatonin formulas are either fast-release or slow-release, both of which have drawbacks. Fast-release formulas can help encourage sleep, but because they release melatonin quickly, levels drop too soon and the effect wears off, causing you to wake in the middle of the night. Conversely, with slow-release formulas, melatonin can be released too slowly and levels may peak too late in the night, often resulting in morning grogginess.

Melachron is the first formula to combine fast- and slow-release melatonin in a patented pulsatile-release delivery process that mimics the body’s natural melatonin-release cycle, helping you to fall asleep quickly and stay asleep all night, with no morning grogginess.

Jet lag: Several trials have shown that melatonin helps reset the shifts in a disturbed sleep-wake cycle that are common during international flights and among swing shift workers. This helps suppress suppress symptoms of jet lag and accelerates the body’s return to a normal sleep-wake cycle.

Melatonin is mainly transformed into 6-hydroxymelatoninsulfate in the liver and is eliminated through the kidney. Melatonin has a very short half-life of about 30 minutes. After taking Melachron®, approx. 1/3 of the quantity is immediately released, and the remaining 2/3 are released in several small bursts at different times (pulsatile release). This helps the individual to fall asleep quickly as well as it ensures physiological serum concentrations for sleep maintenance for up to seven hours. Thereafter physiological daytime values are achieved about eight hours after melatonin is taken in the evening.

Dosage: As a dietary supplement, take 1 tablet immediately before bed with 8 ounces of water.