In order to be diagnosed with SAD, you have to meet the full criteria for clinical depression, you must only experience the depression during a particular season and it must occur for a minimum of two years. If you are experiencing several of the following symptoms, you may meet the diagnostic criteria for a major depressive episode:

Why Does SAD Occur? 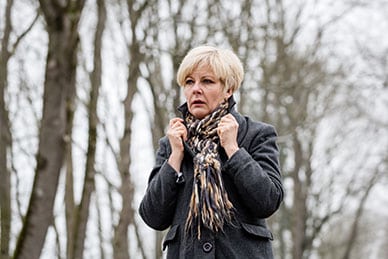 There are several factors that contribute to depression in the darker months of the year (the causes of summertime depression are much less understood). Serotonin is a neurotransmitter highly responsible for maintaining a normal mood; production of this chemical is partly triggered by sunlight exposure. Since there is much less sunlight during the fall and winter, serotonin levels can plummet. Less sunlight also means less vitamin D production; a lack of this nutrient has been highly linked to depression and mood.

Melatonin is another neurotransmitter—its presence promotes mental and physical sleepiness, which is important for falling asleep at night. Melatonin begins to be secreted once the sun goes down; its release is triggered by darkness. When the world around you is dark all the time, melatonin may be released at inappropriate times, leading to lethargy and lack of concentration, which are integral symptoms of depression for many people.

In the fall and winter, the generalized darkness of the outside world can have a negative effect on brain chemistry, causing depression. The cold and gloomy weather can also drive many people to stay inside. Though it may feel cozy to stay at home in the winter, the downside of this is that it could lead to social isolation. Social isolation may be a contributing factor for wintertime depression for some sufferers.

How Can SAD Be Treated?

There are many possible angles to take when it comes to treating seasonal depression. The mainstays of treatment are medication to help re-balance brain chemistry, and specialized psychotherapy for seasonal depression. Therapy is great for helping the patient learn to identify and change negative thoughts and behaviors that perpetuate depression, learn healthy ways to cope with depression and learn how to manage stress.

The principal aspect of treating seasonal affective disorder, that isn't used to treat conventional depression, is light therapy. The purpose of light therapy is to mimic natural outdoor light to replace the sunlight lost during winter. This treatment has been used for seasonal depression since the 1980s. Traditional light therapy consists of sitting in front of a specially-made bright light for 20 to 60 minutes, usually within the first hour of waking up in the morning.

A common complaint of people who use light therapy is that they do not always have time to sit in front of the light every single morning. To make light therapy more flexible and convenient, a number of companies have developed special light-emitting glasses. With these special glasses, the wearer can continue to carry out everyday tasks while receiving therapeutical doses of light that does not affect the quality of vision.

In addition to these treatments, another great addition to a seasonal depression treatment plan is taking a supplement that contains vitamin D, which has been shown in research to help relieve depressive symptoms. Lastly, an important habit for sufferers of any type of depression to develop is exercise. Research shows that regular exercise can be as effective as medication or psychotherapy. Even just 30 minutes of aerobic exercise three times a week can make a big difference. Exercise relieves depression because it releases endorphins, regulates the circadian rhythm, reduces stress, increases light exposure if done outside and can help improve self-esteem.