Best Foods to Protect Your Heart

Cardiovascular diseases are still the number 1 cause of death. Every fourth person dies from it. Therefore, it is vitally important that people strives to improve their heart health. A healthy diet is essential. According to research, three foods can drastically reduce the risk of heart disease, including fruits such as blueberries, apples and the fruit vegetable tomato. 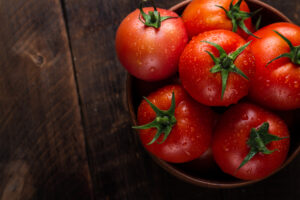 Whether in a delicious spaghetti sauce or in salad, tomatoes not only taste good, they are also said to protect the heart. This fruiting vegetable contains potassium, a substance associated with reduced stroke rates and possibly heart disease, and vitamin K, which is important for wound healing and blood clotting.

Other substances in the tomato, such as carotenoids, not only give the delicious fruit its red color, but also have a generally positive effect on health. Why carotenoids are so effective in protecting against heart disease is due to the substance lycopene, one of the compounds in carotenoids. Lycopene acts as a potent antioxidant against cardiovascular disease, and improves immune function and blood pressure. So it’s not surprising that people living in countries that emphasize a Mediterranean diet rich in fruits and vegetables, are less likely to suffer heart attacks or strokes.

Various researches have been able to prove the positive effect of the tomato on heart health. One study showed that people who drank tomato juice reduced their levels of LDL cholesterol, which is known as bad cholesterol, a risk factor for developing heart attacks or strokes. Other research found that eating tomatoes could lower blood pressure in just eight weeks, and that the fruit reduced inflammation, a key factor in heart disease.

Since it is not always easy to integrate enough tomatoes into our diet, researchers asked themselves whether dietary supplements with the fruit vegetable make sense. To do this, scientists gave 72 subjects, half of whom had heart disease and the other half didn’t, a supplement given lycopene and the other half a placebo. To determine if the supplementation was effective, the researchers began measuring the participants’ forearm blood flow, an indicator that can predict cardiovascular risk. If the blood vessels are constricted, the risk of stroke or heart attack increases.

After two months, the following result was obtained: The persons with heart disease who had been given the tomato pill showed a significant improvement in blood flow; the placebo had no effect.

Blueberries are also said to have a positive effect on the heart. Research from the University of East Anglia, published in the American Journal of Clinical Nutrition, found cardiovascular health benefits from a cup of the delicious, blue fruit. Just 150 grams of blueberries could reduce the risk of developing cardiovascular disease by 15 percent, and the effects were even stronger in overweight people.

Previous studies have shown that regular consumption of blueberries reduces the risk of heart disease and type 2 diabetes. Scientists attribute this to the anthocyanins contained in blueberries, flavonoids that give the fruit its red and blue color. Especially, metabolic syndrome, a precursor to type 2 diabetes, drastically increases the risk of cardiovascular disease. It is characterized by low levels of good cholesterol, high triglyceride and blood sugar levels, high blood pressure, and excess body fat around the waist. People with metabolic syndrome have at least three of these risk factors.

Fruit reduces Risk of Heart Disease by up to 15 Percent

For their study, the researchers used 138 overweight and obese participants with metabolic syndrome between the ages of 50 and 75. The test subjects ate 150 grams or 75 grams of freeze-dried blueberries every day for six months or took a placebo consisting of artificial colors and flavors. At the end of the study, the scientists found that one cup of blueberries per day resulted in a sustained improvement in vascular function and arterial vascular stiffness, leading the researchers to conclude that the risk of cardiovascular disease was reduced by the fruit by 12 to 15 percent. What was surprising was that those participants who consumed only half a cup of blueberries per day did not see any improvement.

Last but not least, apples are said to benefit heart health. According to a study published in the journal Nutrition Research, the substance xyloglucan contained in apples can prevent heart injuries and minimize the risk of coronary artery disease. Previous studies had found that cell wall polysaccharides high in arabinose and/or xylose (a high component of xyloglucan), such as apple pectin, may protect against heart attacks.

For study purposes, rats received either cotton cellulose or xyloglucan for three days. The rodents then underwent ischemia (reduction or disruption in blood flow to an organ) followed by three hours of blood flow restoration to support their hypothesis.

It was found that supplementation significantly decreased infarct size, and increased expression of myoglobin and fatty acid binding protein, which play a role in apoptosis and ATP generation. The research suggests that xyloglucan in apples protects against heart attack and reduces the risk of coronary artery disease by inhibiting cell death and improving energy metabolism based on their findings.

How to Improve Heart Health Naturally

Heart health can be improved by any of us, no matter how old we are. Eating a healthy diet low in salt, trans fats, and saturated fats, but high in oily fish, legumes, nuts, and whole grains can significantly reduce the risk of developing heart disease. In addition, moderate physical activity of 150 minutes per week, stress reduction, adequate sleep and not smoking are essential for a healthy heart.

In addition to this, a dietary supplement such as Cardiochron® which contains lycopen as well as other important substances for promoting heart health, can successfully prevent cardiovascular diseases. A chronobiological administration ensures that all substances are available at the correct time of day to achieve optimal effects.